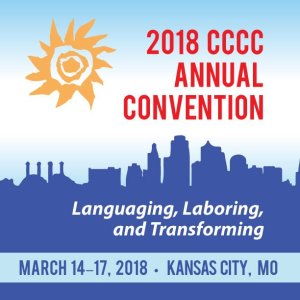 I’ve been a bit absent lately but I haven’t been sitting idly by or overcome by the everyday, so I thought I would share a few highlights from the past two weeks. Plus, I’ve been seeing people posting their Sunday Posts as part of the Caffeinated Reviewer event, and I thought I’d join in.

First and foremost, I attended the 2018 Conference on College Composition and Communication, arguably the largest and most important conference for college composition professors (for those who don’t know, that’s what I do). There are 100s of sessions to choose from over the course of the conference as well as special interest group meetings. Half the fun of the conference for me is sitting in my hotel room on Wednesday night pouring through the session book choosing between roughly 45 possible sessions in each time slot. By the time the conference is over, my mind is always full of new, innovative ideas for instruction and learning. Ah, geeking out over composition, rhetoric, and (in this year’s case) social justice which was a central theme for many sessions.

Oh, and I got to eat. Man I love food. I had a Spaghetti Pomodoro that was to die for, an Eggplant Panini that I ate in its entirety despite being full after half, and some Tuscan fries I am determined to figure out how to make at home. Yum. 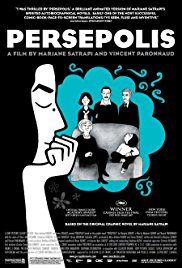 Still, conferencing (and eating) was not my only excitement recently. I also got to present on Persepolis at my college for a series on immigration. The Humanities and Social Sciences division initiated a One Division, One Book program in which every Spring we, as a division, read the same book, teach it in (some) of our classes, and organize events around its theme. This year we chose Girl in Translation, which I reviewed here on the blog. We decided to show the film Persepolis as one of our events, and I, along with the Dean of Humanities and Social Sciences (aka my boss), opened the film and led the discussion afterwards.

The students, faculty, and staff who attended were fantastic and we were able to explore issues of transnationalism, immigration, assimilation, and identity in light of the movie. And, of course, since I am also a film instructor, I was able to sneak in some discussion on the film’s aesthetic as well. I typically hate presentations like this as I hate public speaking. Seriously I get all nervous and light-headed and dry-mouthed, but this time was different as when I walked into the room, I saw about five of my own students in the audience right in the front.

Finally, I was able to read two books over the past two weeks: Persepolis, for obvious reasons, and The Girl with all the Gifts. I’ll have reviews of both books up this week.

I also am almost finished with Black Ink: Literary Legends on the Peril, Power, and Pleasure of Reading and Writing. I am loving this book. A collection of essays written by some of the most famous names in Black American literature, this anthology, so far, doesn’t have a single essay that isn’t well-written, moving, and thought-provoking. Despite the fact that I haven’t even finished (I think I have three or four essays left) I have already submitted it as a possibility for next year’s One Division, One Book program.

So what have you guys been up to?

5 thoughts on “Two Weeks of Writing and Reading”