The very first book I fell in love with was a strange tale, one my mother does not remember fondly. She remembers reading it over and over, sometimes back to back at bedtime. I would beg for this book then, and I still have the same copy 35+ years later.

Marjorie Flack and Kurt Wiese wrote this 32 page, picture-book story about a duck named Ping. I have copied it here for you: 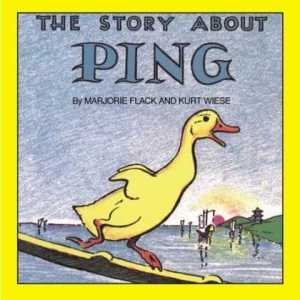 Once upon a time there was a beautiful young duck named Ping. Ping lived with his mother and his father and two sisters and three brothers and eleven aunts and seven uncles and forty-two cousins. Their home was a boat with two wise eyes on the Yangtze River.

Each morning as the sun rose from the east, Ping and his mother and his father and sisters and brothers and aunts and uncles and his forty-two cousins all marched, one by one, down a little bridge to the shore of the Yangtze river.

All day they would hunt for snails and little fishes and other pleasant things to eat. But in the evening as the sun set in the west, “La-la-la-la-lei!” would call the Master of the boat.

Quickly Ping and his many family would come scurrying, quickly they would march, one by one, up over the little bridge and on to the wise-eyed boat which was their home on the Yangtze river. Ping was always careful, very very careful not to be last, because the last duck to cross over the bridge always got a spank on the back. But one afternoon as the shadows grew long, Ping did not hear the call because at that moment Ping was wrong side up trying to catch a little fish.

Ping knew he would be the last, the very last duck if he crossed the bridge. Ping did not want to be spanked. So he hid. Ping hid behind the grasses, and as the dark came and the pale moon shone in the sky Ping watched the wise-eyed boat slowly sail away down the Yangtze river.

All night long Ping slept near the grasses on the bank of the river with his head tucked under his wing, and when the sun rose up from the east Ping found he was all alone on the Yangtze river.

There was no father or mother, no sisters or brothers, no aunts or uncles, and no forty-two cousins to go fishing with Ping, so Ping started out to find them, swimming down the yellow waters of the Yangtze river.

As the sun rose higher in the sky, boats came. Big boats and little boats, fishing boats and beggars’ boats, house boats and raft boats, and all these boats had eyes to see with, but nowhere could Ping see the wise-eyed boat which was his home.

Then came a boat full of strange dark fishing birds. Ping saw them diving for fish for their Master. As each bird brought a fish to his Master he would give it a little piece of fish for pay.

Closer and closer swooped the fishing birds near Ping. Now Ping could see shining rings around their necks, rings of metal made so tight the birds could never swallow the big fish they were catching.

Swoop, splash, splash, the ringed birds were dashing here and there all about Ping, so down he ducked and swam under the yellow water of the Yangtze river.

When Ping came up tot he top of the water far away from the fishing birds, he found little crumbs floating, tender little rice cake crumbs which made a path to a house boat. As Ping ate these crumbs, he came nearer and nearer to the house boat, then – SPLASH!

There in the water was a Boy! A little boy with a barrel on his back which was tied to a rope from the boat just as all boat boys on the Yangtze river are tied to their boats. In the Boy’s hand was a rice cake.

“Oh-owwwwwoooo!” cried the little Boy, and up dashed Ping and snatched at the rice cake. Quickly the Boy grabbed Ping and held him tight.

Then the Boy’s father and mother pulled at the rope which was tied to the barrel on the little Boy’s back. They pulled and they pulled and up came Ping and the Boy on to the house boat.

“Ah, a duck dinner has come to us!” said the Boy’s father.

“I will cook him with rice at sunset tonight,” said the Boy’s mother.

“NO-NO! My nice duck is too beautiful to eat,” cried the Boy. But down came a basket all over Ping and he could see no more of the Boy or the boat or the sky or the beautiful yellow water of the Yangtze river.

All day long Ping could see only the thin lines of sun which shone through the cracks in the basket, and Ping was very sad. After a long while Ping heard the sound of oars and felt the jerk, jerk, jerk of the boat as it was rowed down the Yangtze river.

Soon the lines of sunshine which came through the cracks of the basket turned rose color, and Ping knew the sun was setting in the west. Ping heard footsteps coming near to him.

The basket was quickly lifted, and the little Boy’s hands were holding Ping. Quickly, quietly, the Boy dropped Ping over the side of the boat and Ping slipped into the water, the beautiful yellow water of the Yangtze river.

Then Ping heard this call, “La-la-la-la-lei!” Ping looked and there near the bank of the river was the wise-eyed boat which was Ping’s home, and Ping saw his mother and his father and his aunts, all marching, one by one, up over the little bridge.

As Ping reached the shore the last of Ping’s forty-two cousins marched over the bridge and Ping knew that he was LATE again! But up marched Ping, up over the little bridge and SPANK came the spank on Ping’s back!

Then at last Ping was back with his mother and his father and two sisters and three brothers and eleven aunts and seven uncles and forty-two cousins. Home again on the wise-eyed boat on the Yangtze river.

I typed the whole story because I didn’t think I could fully express the strangeness of the story in summary. I mean you have ducks getting whacked, one who practically runs away to not get whacked, enslaved birds, imminent death of the main character to feed humans, and boys tied to boats.

This, the strange story of Ping, is the book I learned to read with, the book with which I learned to love reading. What was it about this book that drew me to it? Why did I like this sad tale so much as a child? And why do I still keep the exact same copy read to me as a child on my bookshelf?

What childhood book was your first bookish love?

6 thoughts on “The Book I Fell in Love With First”